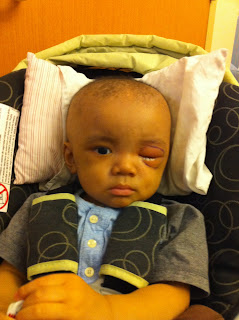 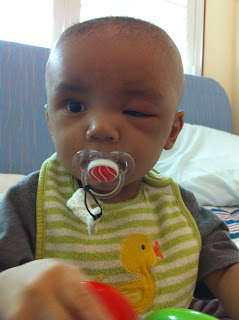 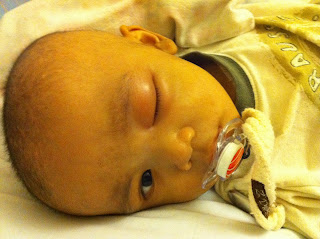 Barry's blood culture results came back and he tested positive for Gram-positive bacteria. They are going to treat this with antibiotics so I am guessing we will be staying here at LPCH for at least 5 days. He also has a stye on the inside of his left eyelid and his left eye is swollen and completely shut.

We took Barry to the clinic today for our weekly blood work. His CBC showed that the platelet counts were 3 (normal people should be between 100 to 300) so we he had to get an infusion of platelets. The doctors also did a peripheral blood smear on Barry's blood and it showed some circulating blasts in the bloodstream. Circulating blasts are a concern but it is not an emergency or critical concern that changes the overall course of treatment for Barry. Near the end of our day hospital visit, Barry spiked a fever of over 101F. So they did a blood culture on him and now we have to stay at Lucille Packard Children's Hospital for 48 hours for observation. Barry has been having persistent fevers without symptoms for the past week so it could be due to the circulating blasts in his bloodstream. The doctors are going to give him some antibiotics and if the blood cultures are negative, hopefully we can leave the hospital on Friday.
Posted by Barry Pham at 4:27 PM 13 comments: 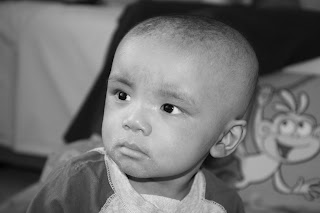 Here is a photo of Barry that was just taken today. Overall, he is doing fairly well. I was told last week that they have identified two cord bloods that are both a 4 out of 6 match. Although this is not the best match, it is good to know that we at least have a cord blood match that we can work with if no other better matches turn up. The earliest date that Barry can have his second bone marrow transplant is in October 2010.
Posted by Barry Pham at 5:35 PM 2 comments:

About three weeks ago, the doctors started to give Barry a "light" course of chemotherapy to help with his recurring fevers. This is ALL-directed therapy and the chemotherapy drugs they are giving him are listed below. We get this chemotherapy once per week on an outpatient basis and this is currently our third week on this chemotherapy regimen.

We went to LPCH today and here are Barry's lab results:

Barry had a bone marrow biopsy and aspirate that was done on Tuesday July 6, 2010. The results came back from St. Jude Children's Research Hospital and the MRD is at 24%. This is good because the previous bone marrow aspirate showed an MRD of 29.3%. So Barry's leukemia is decreasing without the use of any chemotherapy.
Posted by Barry Pham at 1:14 PM 1 comment: 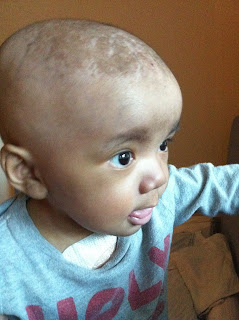 Today Barry had a bone marrow biopsy and aspirate done at LPCH. We will know the results probably tomorrow. I will update the results as soon as I hear from the doctors.
Posted by Barry Pham at 11:49 AM 1 comment:

On Tuesday June 29, 2010 we took Barry to the emergency room at Stanford Hospital at around 9:30pm. He spiked a fever of over 101F so we called the on-call hemotologist/oncologist at LPCH and told her that we were coming. He stayed in the ER until about 2:00am when they transferred us to LPCH. They ran the usual battery of tests on him and gave him some antibiotics. We also did a foot x-ray on Barry and it was confirmed that he had a hairline fracture on his left foot. If everything goes according to plan, we should be leaving LPCH this afternoon of Friday July 2, 2010.
Posted by Barry Pham at 11:36 AM 5 comments: