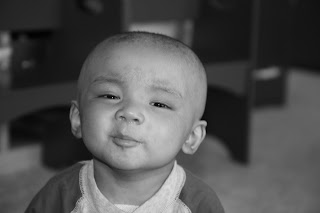 Here is a photo of Barry that was taken on Tuesday July 27, 2010. In the photo, Barry seems to be smirking but he really has a bunch of Cheerios in his mouth. This was Barry's last photo that was taken while he was at home; the next day, we were admitted into Lucile Packard Children's Hospital.

We want to thank everyone who came to Barry's memorial service on Saturday August 7, 2010. I estimate that the attendance at the memorial service was about 300 people. So many toys were donated in Barry's memory and we took those toys to Lucille Packard Children's Hospital.
Posted by Barry Pham at 6:10 PM 10 comments:

We are having a memorial service for Barry on Saturday August 7, 2010 from 9:00am to 2:00pm. Please feel free to come visit Barry anytime during this viewing period. There will also be a 30 minute prayer service that starts at 11:00am. The memorial service will be held at Campbell Memorial Chapel.

Also, in lieu of sending flowers for Barry's memorial service, we request that you either
a) bring any new toy and it will be donated to Lucile Packard Children's Hospital or
b) make a charitable donation to Lucile Packard Children's Hospital at this weblink: https://www.supportlpch.org/SSLPage.aspx?pid=298
Posted by Barry Pham at 4:05 PM 8 comments:

Barry Quinn Pham passed away at around 1:10am on Thursday August 5th, 2010 at Lucille Packard Children's Hospital after a long and valiant battle with leukemia. He was born on April 9, 2009 and he was barely 16 months old. RIP Barry Pham.
Posted by Barry Pham at 1:19 AM 19 comments:

Today we signed DNI and DNR papers for Barry. His condition is deteriorating and we don't know how much time he has left.
Posted by Barry Pham at 9:27 PM No comments: 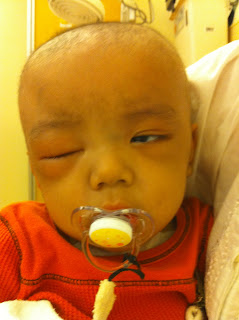 Preliminary results from today's bone marrow biopsy show that Barry's marrow is full of blasts and very few healthy cells. This is very bad news. His fevers persist and he is feeling very very uncomfortable. His recent CT scan on Sunday night showed lesions in his liver. Doctors are now treating this infection with a broad spectrum of antibiotics and anti-fungal medicine.

Here is a photo of Barry this morning. The photo shows Barry's right eye swelling. Last week it was the left eye that was swelling.
Posted by Barry Pham at 4:46 PM 2 comments: